Suicide among Veterans is a problem nationally. Suicide rates for Veterans are higher than for the general population, thus suicide prevention is a high priority for the VA. Rural Veterans are at greater risk for suicide; they have higher suicide rates, and firearm deaths are more common in rural suicides. Based on FY2017 data, VISN 16 is the 4th most rural VISN (Veterans Integrated Service Network). Of its 419,374 healthcare users, 41% are classified as residing in rural or highly rural areas. Addressing suicide prevention aligns with the national and VISN priority of implementing best practices for suicide prevention.

In collaboration with VISN 16 Leadership, this project will adapt and implement an evidence-based suicide prevention intervention—Caring Contacts—in a non-mental health setting, the emergency department, to target a wider audience of Veterans (as compared with only those who receive care in the mental health clinic). Rates of self-directed violence in VISN 16 are presented in Figure 1, with higher rates indicated in red. This data is based on reporting by Suicide Prevention Coordinators, so higher numbers also may indicate better reporting. 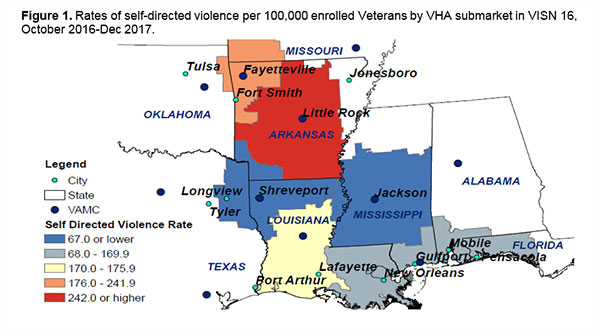 Caring Contacts (CCs) is a simple intervention that involves sending patients at risk of suicide brief, non-demanding expressions of care over a year or more. Studies of CCs have demonstrated significant reductions in suicide deaths, attempts, and ideation at one and two-year follow-up. CCs have been found to be feasible and acceptable with military and Veteran populations and effective with active duty soldiers and Marines.

The objectives of the VISN PII startup phase are to:

This project will develop a Caring Contacts protocol for the VA emergency department setting and a CCs implementation toolkit. This protocol and toolkit will help other facilities and VISNs implement this suicide prevention intervention.