a. Definition: A way to display and analyze data on a process over time using statistical methods to determine when variation in the data is other than would be expected or if the variation is due to a an undesirable cause. In healthcare, it can be used to determine the effectiveness of an intervention, monitor the consistency of work done or determine if there has been a change in the environment. Since a degree of randomness exists in most healthcare processes, a degree of variability may be acceptable. The control chart is useful in determining when the variability exceeds the expected randomness based on upper and lower control limits on the range of likely random fluctuations. 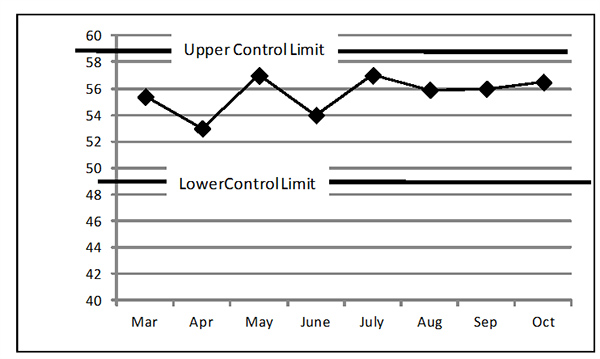 In research and quality improvement, there may be a change in an outcome measure as a result of an intervention. This may mean that there should be a change in the control limits but it would still be necessary to monitor the variability.

c. Example: A hospital's GI department tracks the time taken for a particular procedure. Of course, there is variability in the time for each patient and provider. One statistic they can measure is the average time for all cases of a particular type each month. The hospital has established a range that should be expected for the average amount of time taken. There were enough cases so that the monthly average should not vary a great deal. Control limits were statistically calculated using 99.5% confidence interval. Deviation outside this interval should occur only rarely, not occur more than 0.5% of the months, unless something had changed, which should be investigated. Besides noting if the control limits were breached, it is also relevant to look at trends within the control limits to alert the clinic to something unusual occurring. An unusual occurrence would be a series of points moving in the same direction, for example, or an alternating pattern of data points above and below the midpoint. The control chart limits are supposed to indicate the range of acceptable variability due to the nature of the activity. If the data indicates some pattern or predictability then there may be an undesirable factor occurring. This would indicate a need for further investigation even if the data points are still within the control limits.

1) Gather data on the metric or measure to be tracked. This can be a quality measure or other attribute of a system where we want to be alerted if the variation is greater than expected.

2) Based on the available data, determine the average of the data, as well as the extent to which the measure varies randomly; this random variation is captured in the variance or standard deviation of the measurement.

3) Determine how sensitive you want to be to detecting changes. For example, we might want the control limits to encompass 95% of the variability and then want to be alerted when the measure breaches these 95% control limits.

4) Create a graph showing ongoing data as well as the control limits. Consider any value outside these limits to be an indication that the tracked process is "out of control" or something has changed which bears further investigation.

Note: Control charts can be used on individual measures, averages of groups of data, ranges for a group or the variability. A spreadsheet program, such as Excel, facilitates the calculations as well as drawing of the graph.