a. Definition: In order to assure a successful change, an organized and reliable implementation approach must be used. Quality improvement changes, such as those that result from research findings, seem to succeed best when repeated small incremental steps are used. PDSA cycles consist of planning the change (Plan), carrying out the change (Do), observing and analyzing the results of the change (Study) and then deciding what additional changes should be made (Act). This is a cycle, done repeatedly until the results meet the objectives. It is best to start out with a small change or test and to learn from that before full implementation where problems might occur on a larger scale.

b. Literature: Lean method literature provides descriptions and how to implement PDSA. Various publications and organizations provide guidelines, templates and examples. There is literature on examples of PDSA use, such as: 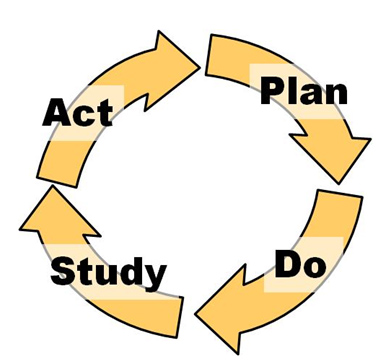 PDSA is a cycle and often shown as a graphic such as:

d. Steps: The idea of PDSA is a cycle of steps, generally implementing a small change, learning from the results and repeating the cycle until the desired change is fully complete and sustaining. A PDSA worksheet is available from a number of sources and some healthcare organizations have developed their own PDSA worksheet. These record for each step:

Repeat this cycle as necessary.