a. Definition: A graphic representation of the inputs or ingredients to a particular issue or problem. Also sometimes known as, or a part of, root cause analysis. (see Section 14) The diagram, also called an Ishikawa Diagram, starts with an issue or problem and lines connect to it representing possible causes. Each cause is then broken out further with lines representing possible causes for each cause. The result looks similar to a fishbone.

c. Example: Research indicated a higher incidence of stroke in a certain patient population. There were a number of factors which might contribute to the occurrence of strokes. The basic issue was "higher stroke incidence;" this became the "head of the fish" in the diagram. Then the risk factors were developed from several discussion groups and the risk factors were grouped into about six different categories. The structure became a basis for formulating research priorities.

In another example of the fishbone diagram, a hospital was trying to identify factors contributing to an increased infection rate. Interviews and discussions resulted in a variety of causes which were organized into the diagram below. Colors were added to indicate the highest priority items. 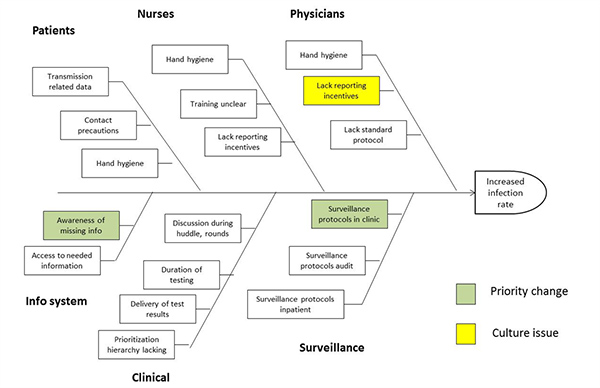 1) Identify the key single problem or issue to be addressed.

2) Identify factors causing or influencing the initial problem; these may themselves be problems which have their own causes. This process often works well in a group setting where the members offer additional causes and problems. This collaboration then builds an accurate and complete picture that might be difficult for a single individual to come up with.

3) Continue to build the sequence of problems and causes and put into a diagram form, such as is shown above. It is unusual to go beyond three levels but it may be necessary in some cases.

4) The resulting diagram then becomes a starting point for improvements or determination of ways to address the sources of the initial problem. By deconstructing problems in this diagram the organization often better understands what is needed and where changes must take place. This is an example of a way to break down a problem into more manageable parts.