a. Definition: A workplace organization scheme with a focus on neatness to support efficiency. It originated in the Toyota (Lean) method with its Japanese terms transliterated into English. It consists of five Japanese words beginning in "S": Seiri, Seiton, Seiso, Seiketsu and Shitsuke, which means tidiness, orderliness, cleanliness, standardization and discipline and sometimes referred to as sorting, set in order, systematic cleaning, standardizing, and sustaining. Often significant improvements occur when a "5-S" exercise is done. Simple neatness produces benefits in efficiency and error reduction. Some healthcare organizations refer to 6-S where the concept of Safety & Security is added. The 5-S method is useful when an area should perform better and the idea can be used in conjunction with other interventions to assure maximum improvement. An existing lack of order in the workplace can constrain improvements of any type and harm quality. The 5-S process involved analysis of a location in terms of each of the 5, or 6, attributes.

c. Example: Staff is trained in what sort of workspace problems should be identified from a 5-S standpoint. A nursing station is reviewed, for example, in 5-S terms and the staff observes instruments not as orderly as they could be, supplies not stored in a standardized way and procedures not in place to assure that once the workplace becomes more neat that the change will be sustained.

1) Train individuals who will conduct the 5-S exercise in the principles and example of 5-S. They need to understand and be sensitive to the 5 (or 6) aspects which are necessary for a neat and hence productive workplace and that it is not intended to blame or penalize anyone.

2) Select a work area to be studied. This would likely start with areas expected to have poor productivity or quality but nearly all areas have potential improvements.

3) Observe the area to be "5-S'ed" and write up the problems observed.

4) Sort the results themselves. Often it is a useful practice, particularly when a team of observers is involved, to do the observation and then reconvene the team away from the area studied. Some use the "waste wheel" idea on a wall where the observers post sticky-notes with each note holding a single issue. The notes are the result of when everyone from a group goes to visit an area and finds cases of waste or lack of neatness. 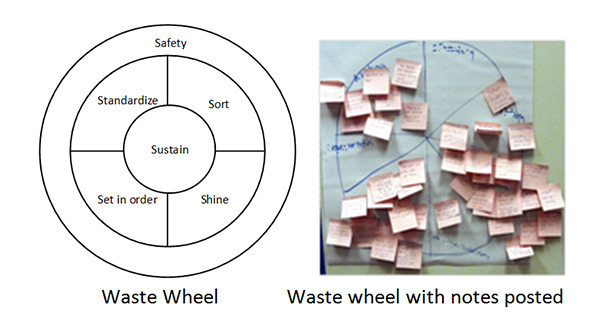 6) Set in place standard practices so that the improved operation is sustained.